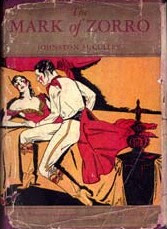 Diego was feeling pretty burned out this week. He told Bernardo that all he wanted to do was put on his Zorro mask, go steal some money from el Gobernador's tax collector and distribute it to the poor.

Because his personal life is a mess. Despite the intervention of the Contesa Marquesa Carmen Santillana de Roquette, Esmeralda decided to stay with el Comandante Montero both to protect the De La Vega family from retaliation and to help spring her mother Sara Kalí from the prison.

So the result to date of poor Diego getting mixed up with the Sanchez de Moncada sisters is that the sister he loves is pregnant with his baby (which he doesn't know yet) and married to his worst enemy. Meanwhile, he got caught nekkid in bed with the evil sister that he hates and now he has to marry her. At least she seems to have broken off her affair with her now brother-in-law Montero.

Dames. They'll mess up a masked hero's life every time!

Zorro's Jezebel, Mariángel, who's quite the schemer (Photo: Telemundo): 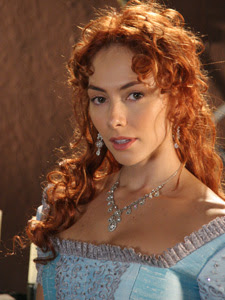 Zorro got a workout this week though. In addition to liberating funds from el Gobernador Fernando Moncada's men, he came to stop a gang who was running a bunch of poor people out of their houses on Fernando's orders. Fernando was doing that as a way to pressure María Pia to marry him, which she refused to do even though he had her kidnapped  and was holding her bound and starving in a stable.

This incident pretty much put to rest any question fans might have had about whether Zorro was willing to use lethal force on the bad guys. From the way he hacked away at Fernando's goons, it's safe to say he's not averse to speeding evildoers on their way to the next life when the situation calls for it.

Sor Suplicios' possesstion case improved considerably during this week. Last week she was possessed by Linda Blair and doing the Exorcist bit. This week she was possessed by the spirit of Sojourner Truth and decided that the escaped African slave she had seen was an angel rather than a devil and now the sisters are hiding him in the convent. I think it was the slave's pulling her out of a bog of quicksand at the last second that convinced her.

Esmeralda's character is old enough to do the cunning sophisticate convincingly. But she's also young enough to do a Nancy Drew girl detective role, too. She often gets caught when she's sneaking out or sneaking around. But she's pretty good about coming up with excuses on the spot. This week Olmos the hunchback helped her alibi herself when Montero caught her sneaking around the prison looking for her mother.

Speaking of whom, Sara Kalí's story picked up this week. She told her cellmate that she was really the rightful heiress to the Spanish throne. But due to dynastic politics, she had to take refuge with the gitanos (Gypsies) to escape being executed. She became their queen instead. We still don't know who Esmeralda's real father was. We also don't know that much about her male cellmate. He says he got busted for embezzling funds from the public (royal) treasury years ago to pay for medical care for his dying wife. But he also could be acting as a spy for Montero and/or Pizarro.

By the end of the week, it seemed that there were at least two, maybe three separate plots underway to spring Sara Kalí: Esmeralda and the gitanos, Zorro, and Olmos together with some mystery man. I'm thinking Pizarro may have used Sara Kalí's cellmate as a spy to get information on her. And now he's got a plan going with Olmos behind Montero's back to take her out of jail and hold her for ransom or blackmail of some kind.

In other action, Alejandro had a sword fight with Fernando when he found out Fernando was holding his sister. María Pia told Fernando that he had killed Regina/Typurnia, who was Alejandro's wife and Diego's mother. She had even found his knife with his initials on it in Regina's body and kept it. Yuck! And Padre Tomás surprised everyone by ending the Alejandro/Fernando sword fight with some masterful swordplay of his own. When Alejandro later expressed his amazement, Padre Tomás replied, "La vida es llena de sorpresas." (Life is full of surprises.)

Cardinal Oliviera finally agreed to formally approve the convent and appoint María Pia as Mother Superior. And Guadalupe/Yumalay is still after Alejandro's affection, beyond the godfather kind, I mean. She discovered a porttrait of Regina in full Indian dress, and at the end of the week was taking Alejandro's breath (and maybe sense) away by dressing identically to Regina/Toypurnia's portrait. We still don't know the exact relation of Yumalay to Toypurnia, because her tribe doesn't talk about the dead so as not to disturb their spirits.

I would say Fernando had the best part of the week. Where Montero and Pizarro are meodramatically evil, and Montero slimy to boot, Ferando's evil is a tormented-soul kind of problem. He's mean, amoral and domineering. But he also is in love with María Pia and in full stalker focus on her. And his sense of male honor is stunned by the news that he murdered the wife of his best friend - even though Alejandro had been ready to run him through a couple of hours before. Arturo Peniche as Fernando does a tormented villain well.

I'm also really enjoying Jorge Cao as the liberation-theology priest Padre Tomás. In his last telenovela gig on Amores/Amores del mercado, he also played an evil but tormented business magnate. Seeing him here as a hardened revolutionary priest is a real change of type and shows off his acting abilities well. He's kind of like Diego/Zorro's main mentor. I'm sure we'll learn a lot more about him and the secret Cofradía society of which he and Zorro are part.

Thanks.  I'm having fun following this novela.

Thank you for the Zorro summaries. They give a great high-level overview of plot and character.

Fernando and Olmos are inspired tortured souls, aren't they? And, Jorge Cao as Father Tomas is an absolute joy to watch.

For fans who don't speak Spanish & lack
closed captioning, check out http://www.caraycaray.blogspot.com for English translations of most episodes.

Yeah, Olmos is *seriously* tormented.  But he seems to be developing to have a decent side.  Friday's episode (04/06) indicates that he's trying to protect Sara Kalí from the crown, though we still don't know what his game is with her.  Obviously he knows that she's royal blood from when he warned Esmeralda not to let anyone know Sara Kalí has a daughter.

Yes, I'm really enjoying Jorge Cao as Padre Tomás.  It's not such an easy character to pull off, I would think.  He needs to be genuinely credible as a priest, even with Diego and their co-conspirators.  But he also needs to come off as sophisticated and well-educated enough to deal with el Gobernador, Cardenal Oliviera and the rest, but also be credible as a tough-as-nails secret society fighter.

And thanks for the tip about Caray Caray.