What Are They Thinking?

There's something comforting about conspiracy theories.  Sometimes you would rather believe that seemingly inexplicable actions or statements by government officials are part of a clever if nefarious plot than to think, "These clowns just don't know what they're doing!"

You don't need to be a wily Old World diplomat to see the problem with that pitch.  If the US thinks we have enough troops there, but still welcomes other countries to contribute more, it sure sounds like we're asking for France, Germany, India or whoever to substitute their soldiers for ours.

While that may sound good to American politicians and voters, it's unlikely to sound good to politicians and voters in the countries we're asking to send their soldiers into harm's way in what sure sounds like a deteriorating security situation in Iraq.  Particularly since some many military analysts seem to think the overall force level there is too low to easily stabilize the country.

Given the unpopularity of the war in every country that would be able to commit significant nubers of troops, this sounds almost bizarre.  Or at least clueless.  What are these people thinking?

Should we hope there's a conspiracy?  Because the idea of running a war on frat-boy posturing is pretty scary.

Simon's withdrawal from the California recall/governor's race highlights one of the key points of the analysis by Harold Meyerson at American Prospect Online. He points out that one of the features of the recall that California is currently enduring is to deprive voters of party primaries:

What the recall has done is eliminated the primary. In a normal election, Golden State Republicans would themselves be able to select who their standard-bearer would be. Democrats would comparison shop among a number of promising candidates, rather than be presented with the fait accompli of Bustamante as their backup standard-bearer.

That analysis especially holds true on the Democratic side. Essentially, the Democratic Party leaders picked Bustamonte as their fallback candidate through what we used to call the "smoke-filled room." Although for anti-smoking California, maybe we need an updated metaphor.

Simon's withdrawal under pressure from the Republican Party (Karl Rove?) also supports Meyerson's point.  However, I think my earlier post on the electoral hurdle Schwartzenegger has to clear is still valid.

Unless Tom McClintock and Peter Ueberroth can be persuaded to withdraw, "Ahnie" still has a competitive situation on the Republican side.  Although Simon's absence clearly helps him, particularly in the very short run.  Still, Ahnie still faces having to get something like 70% of the non-Davis-Bustamonte vote to become governor.

Alabama seems to be having quite a time with issues of church and state right now.

Besides the controversy over the Ten Commandments monument, Governor Bob Riley is part of a dispute within his own Republican Party about the correct Christian position on taxes.

On the Ten Commandments front, the print edition of the Mobile Register of 08/24/03 carried a profile of State Supreme Justice Roy Moore, who was recently suspended from his judicial duties for refusing to obey a court order to remove the monument from state property.

The article, by Associated Press writers Jon Krawczynski and Allen Breed, has a couple of items about Moore that especially caught my attention.

He comes off as a rigid person who enjoys confrontations.  The article portrays him as the son of a none-too-affluent "itenerant construction worker."

Moore seems to have grown up with a stern conscience of a highly religious cast.  But, the authors say, when he was an officer with the Military Policy in the Vietnam War, "Moore's bible seemed to be the Army handbook." He earned the derisive nickname of "Captain America" because he insisted on "regulation haircuts and constant salutes."

They report that he was rigid to the point of almost getting "fragged" [assassinated] by his own men.  One of them, Barney Hall, is quoted as saying, "His policies damn near got him killed in Vietnam. He was a strutter."

That latter comment suggest that his men had more serious complaints than a strict haircut policy. If he was considered a "strutter", it probably means his men thought he was taking needless risks without really knowing what he was doing.

The article also notes that he has been unusally outspoken for a judge on political issues.

The picture that emerges is that of a man who takes risks that make him look on the surface like a tough fighter, but without thinking through the damage he may be causing either to others or to himself.

In the same paper, editor Michael Marshall casts doubt on how great a role religious conviction plays for Moore in this show.  He claims Moore is casting himself as a persecuted religious zealot.  But he contends that Moore "is not a religious zealot."  Instead, "He's just another media harlot."

Friday's Washington Post has one of the best articles I've seen on the politics of war since the World Trade Center/Pentagon attacks of "9/11".

One of the greatest strenths of democracy is that ordinary people don't like war.  Even popular wars create a certain amount of electoral suspicion of the Presidential party prosecuting the war.

Even before the American press discovered what a scam the WMD claims had been, Dana Milbank was one of the few mainstream reporters that was doing his job as a journalist by writing articles applying some genuine critical analysis to Bush's claims, including on foreign policy.  This is a very good article that deserves the attention it's getting.

Bush and Rummy coasted on war fever from September 2001 through the 2002 Congressional elections up until July 2003.

Now the free ride is over. The problems in Iraq and Afghanistan are too obvious to be covered up by patriotic slogans and happy talk.

The recall is an attempted political coup by the Republicans.  Increasingly, that party's authoritarian tendencies - as embodied by people like Tom DeLay and John Ashcroft - makes them increasingly unwilling to accept the results of democratic elections.

Because the recall is such an unusual event, the public opinion polls are not as reliable a guide to the position of candidates as in a general election.  For one thing, predicting the likely voters is more of a challenge.

My own position on the recall is NO.

In prediction mode, it seems to me that the numbers give Davis and Cruz Bustamonte a big advantage, despite "Ahnie's" high name recognition and novelty appeal.  The Democrats tend to have a decided advantage now in statewide elections in California.  And most Democrats that turn out to vote will be hearing "No on Recall, Yes on Bustamonte" for weeks before the election

I think the recall will fail.  But suppose it wins by 55%.  That means 45% vote no, and a large percentage of those will vote for Bustamonte.  So after an intense campaign, and hopefully intensely partisan campaigning by the Democrats, Bustamonte is likely to wind up with 45%.

The Republicans, on the other hand, are in effect running a Republican primary in the same election.  Simon won well over 40% in the general election against Davis last year, and he's campaigning hard.  California Republicans tend to prefer red-meat partisans like Simon, which is why he beat out Riordan in last year's Republican primary.  To the drooling-at-the-mouth Reps, Ahnie looks dangerously liberal.

Besides Simon, a couple of other Republicans are likely to draw some percentage of the vote.  So even if you assume only 40% for Bustamonte, Schwartzenegger will have to win 68% of the non-Bustamonte vote to edge him out with 41% of the total. It will be like winning 68% in a highly competitive Republican primary.

I know that's a boring analysis of the California recall "circus."  But it seems to me that's the real framework in which to see this recall vote.

Tags: california politics, schwarzenegger
Posted by Bruce Miller at 12:02 AM No comments:

Getting Help in Iraq?

Bush and Rummy got the war they wanted in Iraq.  And what a mess our troops are facing there now!

In the wake of the attack on the UN building this week, Bush is now talking about going back to the UN to ask for more assistance.  This seems to me to fit well into Bush's modus operandi of using a crisis to promote something it wanted to do all along.

I think that's what's going on here.  Bush and Rummy are never going to turn control of the occupation over to the United Nations.  Barring some major disaster or a catastrophic public loss of confidence in the war, neither of which can be ruled out.

They're just hoping to capitalize on the immediate general disgust at the attack on the UN to get more countries to put their troops into the Iraqi shooting gallery.  I don't think it's going to fly.

The Los Angeles Times reports on Friday that, indeed, the Administration has no intention of conceding control.  Colin Powell, who many people persist in seeing as some kind of realist or moderate despite his performance in the buildup to the invasion of Iraq, says that he assumes any countries sending troops into combat would want to know that they're under competent leadership by the United States.

What are these people thinking?  The LA Times quotes an unnamed European diplomat characterizing the American proposal this way: "It sends us the message, 'We don't need to spill more American blood, we need foreign blood.'"

Bush and Rummy poured out their contempt at "old Europe" before the war.  They insisted that those "weapons of mass destruction" that we have found no trace of yet had to be dealt with immediately.  Now, guess what?  Those countries are taking the attitude of, "You broke it, you fix it."

Tags:iraq war
Posted by Bruce Miller at 11:40 PM No comments: 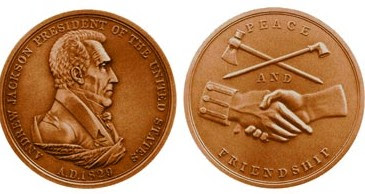 Why Old Hickory? Old Hickory is, of course, Andy Jackson, President of the United States, 1829-1837.

Because he's an heroic figure who championed the interest of working people against concentrated wealth and defended the Union and democracy against its enemies foreign and domestic.

He was also a deeply flawed hero, a slaveowner who - unlike Thomas Jefferson - defended the institution of slavery and displaced the Indian tribes of the Southeast in a way that any American today would find it difficult to defend.

He is an appropriate hero for Americans today because he was one of history's greatest champions of democracy.

But it's also important for us to remember that even our greatest heroes were people that made choices, some of them better than others.  As long as our politicians feel it necessary to constantly say that America is "the greatest country in the world," something is wrong.  When they no longer feel the need to say that, and when the voters no longer need to hear it all the time, we will have regained some of the realistic confidence that made leaders like Jackson what they were.

Well, I keep a little bust of the General (as many of Jackson's admirers always called him) setting on my desk.  And every time an article appears on my computer screen comapring him to today's Enron Republicans, his eyes seem to glow bright red.