The military, the Republican-dominated officer corps and democracy 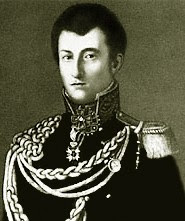 Carl von Clausewitz (1780-1831); protecting democracy was not his first priority

The Mar/April 2007 edition of the Army's journal Military Review includes the 3rd-place winner of a MacArthur Writing Contest, Targeting the American Will and Other Challenges for 4th-Generation Leadership by Maj. David Harper, US Army. Harper addresses some important issues in civil-military relations, in particular how the military functions with a free press in the United States. He writes:

Indeed, the overwhelmingly conservative-Christian, conservative-Republican U.S. officer corps is having only a slightly more difficult time adapting to Middle Eastern Muslim culture than it is in dealing with a free press.

Harper is discussing what is often called "4th-generation warfare", which is the terminology he uses in the article. The term is used with counterinsurgency experts like William Lind to describe contemporary guerrilla warfare. The concept is by no means universally accepted, but that's a different topic.

Harper gives one of the most vivid descriptions I've seen of the adversary position that is often common among military officers toward the free press - despite the fact that the American press on the whole has shown itself in the Iraq War to be anything but aggressively critical. And he defines the very real dilemma for democratic governance which that implies.

However, his acceptance of the disturbingly widespread notion that the "center of gravity" in counterinsurgency war, the most decisive element, is public opinion in the home country. As long as such a definition is taken seriously, it seems unavoidable that not only the press but any kind of democratic, loyal opposition will be viewed as the enemy. It's an idea that needs to be challenged in a serious way.

Unfortunately, American military culture has often fostered an antagonistic relationship with the free press. At best, the military considers the press a tool or weapon used to get the sound-bite friendly command message
out to its intended audiences. At worst, the press is [considered] an enemy.

In 2006, CGSC [the U.S. Army Command and General Staff College] provided each class member the opportunity to participate in a mock media interview. This, along with media panels and classroom discussion, was meant to help future staff officers and commanders learn how to deal with the media. Too often, however, the media was represented as yet another enemy to contend with on the battlefield. Role-playing faculty intentionally caricatured the press as ignorant or extremely biased. Reporters were most often portrayed as being on the attack, rather than as being interested in getting a relevant, truthful story to the public. These are symptoms of and contributing factors to the continued tension between the press and the military. Part of the cause for this attitude is undoubtedly rooted in the military’s increasing isolation from mainstream American culture. (my emphasis)

Here I can't resist saying what should be obvious. If these issues can be discussed this frankly in an Army professional journal, how absurd is it that in our general political culture even some mildly critical comment about the military is often treated as outrageous and contemptable? That's just nuts.

Given these kinds of attitude among the officer corps, is it surprising that a lot of journalists are getting shot by American troops?

There are many sources of such attitudes. One of them is the misbegotten notion that American public opinion is the critical "center of gravity" in counterinsurgency wars like those now in Afghanistan and Iraq. "Center of gravity" in this context is a concept borrowed from the Prussian military theorist Carl von Clausewitz, who has become so iconic for American military thinkers that the gratuitous Clauswitz quotation pops up in military journals like a Marxist's ritual quotation of Marx or Lenin so often that it's common as dirt.

For more on the "center of gravity" concept as it has been transmuted into Pentagonese, see my post The "Stab-in-the-back" tap dance 11/27/06. And, by the way, my caption at the start of the posts isn't entirely fair to the old boy. He did support the military reforms of Scharnhorst und Gneisenau which were an important step toward democratization in the German states by building a people's army, i.e., one drawn from a wide cross-section of the people, an innovative concept in Prussia in the early 19th century.

But here's part of how Harper incorporates the concept into his description of counterinsurgency warfare:

● An insurgent movement can defeat a superpower by defeating its political leadership.
● Depriving a superpower’s leadership of public support can defeat it. The U.S. experience in Vietnam and the Soviets’ struggle in Afghanistan demonstrate the importance of national will to the war efforts of any superpower. (my emphasis)

The concept of Will as used here is essentially a mystical concept. That reference to the Vietnam War is a reflection of how pervasive the alibi became and remains among the officer corps that it was the Liberal Press and gutless civilians back home - and dirty hippie protesters, of course - that lost the war. The fact that, as Harper notes, our officer corps is "overwhelmingly conservative-Christian, [and]conservative-Republican" reinforces this ridiculous, ahistorical notion.

But once you've defined the conflict this way, how do you avoid viewing the press as at best, "a tool or weapon used to get the sound-bite friendly command message
out to its intended audiences" and at worst, as "an enemy"? I don't see how you can.

Harper realizes the democratic problem with this:

From the perspective of well-meaning officers, to win the strategic information war, the drumbeats of good news will simply have to outnumber the bad-news beats. These factors make the officer corps particularly susceptible to becoming almost unwitting participants in the political struggle for the American will, unintentionally crossing legal and ethical boundaries until they find themselves targeting not only the fourth-generation combatant, but the American people. (my emphasis)

If, as shown above, the primary object of the fourth-generation insurgent’s attack is the American national will, then the logical extension of the conflict requires that the U.S. populace be strategically targeted not only by insurgents but by U.S. counterfires. This poses not only an ethical challenge to the military profession, but also a real danger to America’s democratic institutions. (my emphasis)

It's easy enough to reframe the necessary priorities in broad terms: the American voters the ultimate decision-makers in our democracy. And the right of the people to be adequately and honestly informed about military affairs, especially shooting wars in progress, has to be fully respected, no matter how inconvenient that may feel to our infallible generals and their propaganda flacks.

But putting that in practice means having a Congress and a press that are willing to look critically at the actual propaganda operations of the military and hold them to democratic standards. It will also require military officers who are willing to give up the lazy excuse of blaming the press and the public (whether pictured as dirty hippies or weak women or cowardly civilians or whatever) for their failures like the one in Iraq.

Harper has several suggestions of ways to tinker with the process. And he provides his own general, rhetorical reframing of the problem:

If the battles of the next century are going to be waged primarily in the realm of ideas, with fighting over popular support and national will, we require an officer corps and military able to carefully navigate complex issues of ethical and strategic importance. If the enemy’s main objective is to turn the American will by means of a strategic information campaign, the American defense establishment must be able to enter the fray fully cognizant of the ramifications and capable of avoiding harm to the very democratic institutionsit hassworn to defend. (my emphasis)

Lordy, he even used the term "the American defense establishment"!

But this will remain a purely rhetorical solution as long as American public opinion is defined as the prime object of military warfare that must be addressed by the generals. Because what we'll always get is the kind of crap they pulled with Pat Tillman's death. And the endless stream of bogus declarations of constant improvement that we've heard for 4+ years in the Iraq War now.

To end on a reality-check note, it's not only possible to relatively easy for the military and the civilian government backing it up to expose and discredit actual enemy psychological-warfare attempts. I mean, really: how many Americans are sitting around listening to Islamic jihadist broadcasts on the shortwave radio, the way Nazi spies in the Second World War films did? How many American soccer moms and office-park dads are spending hours in front of the computer surfing Arabic radical-Salafist Web sites?

Despite their admiration for much of the fanatical moralism of the Islamic jihadists, would even Dinesh D'Souza and his fans be suckers for something like that?

No, when it comes to countering actual enemy Islamic jihadist propaganda, even the hacks who write the press releases at the military's feel-good "news" sites would be able to come up with convincing refutations to that most of the time!