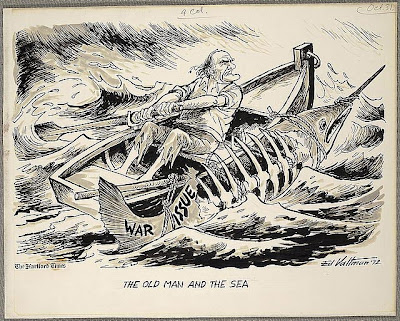 "The Old Man and the Sea", Edmund Valtman cartoon, published in The Hartford Times 10/31/72 - shows McGovern keeping on fighting to end the Vietnam War

George McGovern, the 1972 Democratic nominee for President, responded to one of Dick Cheney's slams at him in Cheney is wrong about me, wrong about war Los Angeles Times 04/24/07. McGovern writes:

The city where the vice president spoke, Chicago, is sometimes dubbed "the Windy City." Cheney converted the chilly wind of Chicago into hot air. ...

He ... said that the McGovern way is to surrender in Iraq and leave the U.S. exposed to new dangers. The truth is that I oppose the Iraq war, just as I opposed the Vietnam War, because these two conflicts have weakened the U.S. and diminished our standing in the world and our national security.

In the war of my youth, World War II, I volunteered for military service at the age of 19 and flew 35 combat missions, winning the Distinguished Flying Cross as the pilot of a B-24 bomber. By contrast, in the war of his youth, the Vietnam War, Cheney got five deferments and has never seen a day of combat - a record matched by President Bush.

If Cheney actually had a conscience, that would have to sting a bit. But the Dark Lord shows no evidence of being burdened by anything so "quaint" as a conscience.

Cheney and Bush blew the effort to trap Bin Laden in Afghanistan by their sluggish and inept response after the 9/11 attacks.

Yes, indeed they did. That's also normally the order in which I refer to them on foreign policy matters, Cheney and Bush.

On one point I do agree with Cheney: Today's Democrats are taking positions on the Iraq war similar to the views I held toward the Vietnam War. But that is all to the good.

The war in Iraq has greatly increased the terrorist danger. There was little or no terrorism, insurgency or civil war in Iraq before Bush and Cheney took us into war there five years ago. Now Iraq has become a breeding ground of terrorism, a bloody insurgency against our troops and a civil war.

Beyond the deaths of more than 3,100 young Americans and an estimated 600,000 Iraqis, we have spent nearly $500 billion on the war, which has dragged on longer than World War II.

The Democrats are right. Let's bring our troops home from this hopeless war.

Sounds right to me.

The vice president spoke with contempt of my '72 campaign, but he might do well to recall that I began that effort with these words: "I make one pledge above all others - to seek and speak the truth." We made some costly tactical errors after winning the nomination, but I never broke my pledge to speak the truth. That is why I have never felt like a loser since 1972. In contrast, Cheney and Bush have repeatedly lied to the American people.

McGovern was one of the subjects in a book I read years ago about people who had dealt with major failures, i.e., serious career setbacks in their lives. McGovern not only has good politics, he's a decent guy with his feet on the ground. He is also clear-headed about what the Iraq War means, while Dick Cheney has his head up his [expletive deleted].

Let's hope that this expectation of McGovern's is fulfilled:

It is my firm belief that the Cheney-Bush team has committed offenses that are worse than those that drove Nixon, Vice President Spiro Agnew and Atty. Gen. John Mitchell from office after 1972. Indeed, as their repeated violations of the Constitution and federal statutes, as well as their repudiation of international law, come under increased consideration, I expect to see Cheney and Bush forced to resign their offices before 2008 is over. (my emphasis)

McGovern has more dignity as well as decency than the Dark Lord. But he does make it clear that he holds a low opinion of Deadeye Dick:

Aside from a growinglist of impeachable offenses, the vice president has demonstrated his ignorance of foreign policy by attacking House SpeakerNancy Pelosi for visiting Syria. Apparently he thinks it is wrong to visit important Middle East states that sometimes disagree with us. Isn't it generally agreed that Nixon's greatest achievement was talking to the Chinese Communist leaders, which opened the door to that nation? And wasn't President Reagan's greatest achievement talking with Soviet leader Mikhail Gorbachev until the two men worked out an end to the Cold War? Does Cheney believe that it's better to go to war rather than talk with countries with which we have differences? [The straightforward answer is yes - Bruce]

We, of course, already know that when Cheney endorses a war, he exempts himself from participation. On second thought, maybe it's wise to keep Cheney off the battlefield — he might end up shooting his comrades rather than the enemy. (my emphasis)

And speaking of conscience, McGovern closes with a quote from the English conservative Edmund Burke, "A conscientious man would be cautious how he dealt in blood."

Which reminds me of one of the really true things the Dark Lord ever said, "Men without conscience are capable of any cruelty the human mind can imagine."

On that topic, he speaks as an expert.

Another note on McGovern: his wife Eleanor passed away in January of this year at age 85. There is a McGovern Legacy Museum at Dakota Wesleyan University. Fortunately for us, McGovern is still creating his legacy.

Unfortunately for us, so is Dick Cheney.