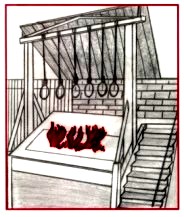 Josh Marshall captured the problem of Saddam's execution well in this post of 12/29/06 when the execution was still pending from which Wonky Muse quoted in  an earlier post at The Blue Voice:

Convention dictates that we precede any discussion of this execution with the obligatory nod to Saddam's treachery, bloodthirsty rule and tyranny. But enough of the cowardly chatter. This thing is a sham, of a piece with the whole corrupt, disastrous sham that the war and occupation have been. Bush administration officials are the ones who leak the news about the time of the execution. One key reason we know Saddam's about to be executed is that he's about to be transferred from US to Iraqi custody, which tells you a lot. And, of course, the verdict in his trial gets timed to coincide with the US elections.

Marshall also picked up on an interesting historical parallel to the practices of the Inquisition.

Juan Cole writes about the execution in Saddam: The death of a dictator Salon 12/30/06, which Wonky Muse also quotes:

One thing is certain: The trial and execution of Saddam were about revenge, not justice. Instead of promoting national reconciliation, this act of revenge helped Saddam portray himself one last time as a symbol of Sunni Arab resistance, and became one more incitement to sectarian warfare.

Saddam Hussein was tried under the shadow of a foreign military occupation, by a government full of his personal enemies. The first judge, an ethnic Kurd, resigned because of government interference in the trial; the judge who took his place was also Kurdish and had grievances against the accused. Three of Saddam's defense lawyers were shot down in cold blood. The surviving members of his defense team went on strike to protest the lack of protection afforded them. The court then appointed new lawyers who had no expertise in international law. Most of the witnesses against Saddam gave hearsay evidence. The trial ground slowly but certainly toward the inevitable death verdict.

Saddam was responsible for so many crimes, a real tribunal held in a safe location under United Nations auspices would have been able to convict him with solid evidence in a trial of high credibility. In the process, the evidence could have been systematically presented of his criminal misrule in a way that would have left no doubt in the minds of any reasonably honest person about his cruelty and criminality.

Instead, the Cheney-Bush administration opted for a farce of a trial that will allow Saddam to be remembered by many Iraqi Sunnis as a martyr.

I can think of several likely reasons that the Cheney-Bush administration didn't want such a trial to take place. The didn't want it to go before the established International Criminal Court (ICC), because Cheney and Bush oppose the entire concept of the court and the kind of international law on which it is based. Also because they themselves along with Rummy, Abu Gonzales and numerous other officials high and low in their administration have to seriously worry about being tried in front of the ICC.

Saddam was tried an executed on the basis of a retaliation his government made to punish a Kurdish city for anti-Saddam activities originating there, specifically an attempt to kill him. But an ICC or any other sensible international tribunal would have also focused on the Iraqi invasions of Iran and Kuwait, both war crimes in themselves. The reason Cheney and Bush wouldn't have wanted to see those charges aired is painfully obvious: it would remind the international community and even the American public that it is a war crime to invade a country that presents no imminent threat to the invading power. The invasion of Iraq in 2003 was just such an act.

In addition, a full prosecution of Saddam on the criminal use of chemical weapons during the Iraq-Iran War would have meant public discussion of embarassing aspects of the Republican administration of St. Reagan and its backing of Saddam's Iraq in its war with Iran. That would include the help given to Saddam's chemical and biological weapons program, the administration's attempt to help cover up Iraq's criminal use of chemical weapons and the US having been for a brief time an actual co-belligerent with Iraq in naval warfare against Iran.

So instead, Cheney and Bush made sure Saddam had a kangaroo-court trial and was hung. And, of course, it was screwy in more ways than one, Cole writes:

The tribunal also had a unique sense of timing when choosing the day for Saddam's hanging. It was a slap in the face to Sunni Arabs. This weekend marks Eid al-Adha, the Holy Day of Sacrifice, on which Muslims commemorate the willingness of Abraham to sacrifice his son for God. Shiites celebrate it Sunday. Sunnis celebrate it Saturday – and Iraqi law forbids executing the condemned on a major holiday. Hanging Saddam on Saturday was perceived by Sunni Arabs as the act of a Shiite government that had accepted the Shiite ritual calendar.

The timing also allowed Saddam, in his farewell address to Iraq, to pose as a “sacrifice” for his nation, an explicit reference to Eid al-Adha. The tribunal had given the old secular nationalist the chance to use religious language to play on the sympathies of the whole Iraqi public. ...

Iraq is on high alert, in expectation of protests and guerrilla reprisals. Leaves have been canceled for Iraqi soldiers, though in the past they have seldom paid much attention to such orders. But perhaps the death of Saddam, who once haunted the nightmares of a nation, will soon come to seem insignificant. In Iraq, guerrilla and criminal violence executes as many as 500 persons a day. Saddam's hanging is just one more occasion for a blood feud in a country that now has thousands of them.