Jerry Ford's legacy: The dark side (3), Rummy and Cheney, "healers" 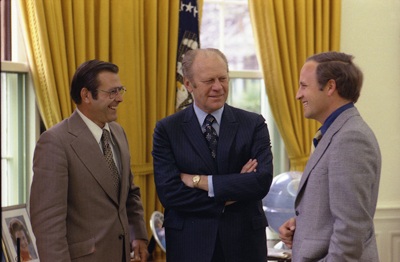 Back in Jerry Ford's administration, as we all now know, "healing" was the business of the President. But not single-payer health insurance or any such socialistic deviance. No, it was spiritual or psychological or political or, heck, some kind of healing.

The Healer-in-Chief had Rummy as his chief of staff, and Rummy brought in Dick Cheney as his deputy. Later, Rummy moved to be Secretary of Defense and Cheney became White House chief of staff.

In Vice: Dick Cheney and the Hijacking of the American Presidency (2006) by Lou Dubose and Jake Bernstein, we get the following glimpse at how Rummy and Cheney practiced the healing arts. Ford selected former New York Gov. Nelson Rockefeller as his Vice President. Rockefeller was the bogeyman of the Reagan wing of the Republican Party, having been Barry Goldwater's chief primary opponent in 1964 in a bitter intra-party contest. Dubose and Bernstein write:

Cheney did more than write memos to Ford. Working with Rumsfeld, Cheney took the vice president [Rockefeller] out of the White House policy process. When the vice president proposed an idea to Ford, the president would hand it off to Rumsfeld, and later Cheney, who would then insure it died somewhere in the bureacracy. "We built in a major institutional conflict with Nelson Rockefeller, a strong dynamic political leader in his own right," Cheney would later acknowledge. "The Vice President came to a point that he was absolutely convinced that Don Rumsfeld and I were out to scuttle whatever new initiatives he could come up with." Rockefeller was right about that.

"They were two little throat slitters," says a journalist who knew Cheney and Rumsfeld socially at the time. (my emphasis)

It looks like we're both writing about the end of President Ford. Here's my brief blast from the past.

Let me know what you think.