This is a strange story: A bid to buff Mississippi's image by Patrik Jonsson Christian Science Monitor 12/12/06.  Here's another version from a couple of weeks ago: Ads throw cold water on Mississippi stereotypes by Kitty Bean Yancey USA Today 12/01/06.

It's about Rick Looser, whose Mississippi PR firm has been producing a series of ads to improve Mississippi's image. You can check out some of the product here: Mississippi...Believe It!

Now, being a native Mississippian myself, I'm all for people finding positive things about the state.  And boosterism we have with us always.

The problem is, well, here's the problem: 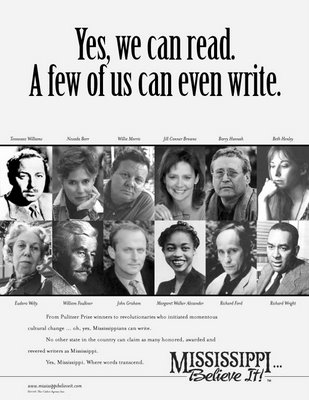 And the worst of it is, the ad shows William Faulkner and Eudora Welty in the second row.  I mean, what-are-they-thinking?!

I ruined a perfectly good shirt when I saw Faulkner's photo there in the second row.  I had one of those Biblical episodes of rending clothes.  After cleaning up the pieces of my shredded shirt, I tried to think through the ad and what might they have had in mind.

I knew from the article what the ad was about.  But if I had seen it cold, I would have thought, "Yes, we can read.  A few of us can even write."  What could that possibly be about?  Then I would have seen Faulkner's photo in the second row.  Rending of clothing would have ensued.

But once you know what it's about, what does that slogan say?  According to my one-person focus group, it says: lots of people think Mississippians are illiterate; there's apparently some basis for thinking so because somebody made this defensive ad; several famous writers are from Mississippi.  And they put Faulkner's picture in the second row!

Not all ofthe ads are quite that goofy.  But that oneand one other - "Yes, we wear shoes.  Some of us even wear cleats." - seem to be two of their favorites.  You can even order t-shirts with those slogans.

There's also a poster and t-shirt of "No black. No white. Just the blues."  Great.  White people invented the blues now, too?  I can just see that on "Hannity and Colmes": "You know, it's our duty to speak out against racism wherever we find it.  And when people talk about black people inventing the blues, that's giving blacks credit for inventing a whole distinct brand of music.  Some white people sometime must have contributed something.  We need to be color-blind about this thing."

Maybe it's well-intentioned.  Although, putting Faulkner in the second row ...

But it seems to me they've managed to reproduce a classic whiny-white-folks kind of defensiveness.  I definitely got that impression from the two articles, which cover very similar material.

The Monitor article gives the impression that Looser emphasizes being defensive about race relations.  The opening paragraph says:

Definition No. 6 in the "Urban Dictionary," an online tome written with the usual irreverence of Web-roaming readers, is the one that most gets under Rick Looser's skin. The entry reads: "Mississippi: the most racist state in the nation."

Let me get this straight.  Looser is most worried about a comment about Mississippi in an online dictionary that no one has ever heard of that no one would rely on if they were choosing a state for investment, a home, a college, or a vacation.

And he credits the inspiration for this campaign to an odd experience:

A conversation two years ago with a 12-year-old Connecticut boy, during a plane trip to Atlanta, spurred Looser to try to remake Mississippi's image. The boy, Looser says, asked him if he hated blacks and how often the Ku Klux Klan marched in his hometown.

The USA Today piece also includes the anecdote about the Connecticut boy:

But what really got to him was sitting on a plane near a 12-year-old from Connecticut, who blurted out: "Do you see those Ku Klux Klan peopleon your streets every day, and do you hate black people?"

You know, I realize that inspiration can come in surprising ways.  Ronald Reagan said that he realized definitively that there must be a God while looking at his daughter Patti's ear when she was a baby.

But I've never gotten any theological revelations from anyone's ear.  And I've never had a life-changing flash of inspiration from a dumb comment by some half-wit 12-year-old.  So it just sounds weird to me.

Okay, here's my focus group's perspective.  This ad campaign sounds like it assumes that its targets are the kind of people that the humorist Roy Blount, Jr., wrote about in a column several years ago.  He said that there are certain people who, when they meet you, want to have you fulfill their stereotypes.  If they find out you're a cop, they want to get you to tell a story about beating the beejesus out of a suspect.  If they hear you're a Southerner, they want to get you to say something sympathetic about the Ku Klux Klan.  People like this are often referred to generically as a******s.

But if you're out to improve the image of a whole state, do you want to target a bunch of people with shallow minds and bad manners?  Okay, if you want to cater to the oil business, you might want to appeal to the Bush clan.  But, still...

You can't really say that much about an image-building project without knowing for what purpose and to whom the pitch is directed.  Their Web site says they want corporations to use their ads, "to inform clients, prospects and potential employees about the wonderful state in which you have chosen to locate."  The "Yes, we can read" posters are distributed to schools.  Supposedly to inspire the students.

It sounds to me like at least some of the ads backhandedly promote the very notions they are supposedly trying to counter.

It would maybe disappoint some people in Mississippi to hear it.  But people outside the state and those bordering on it don't really think that much about Mississippi one way or the other.  It's the same with most of the smaller states.

Consequently, people outside the Deep South are most likely to hear about Mississippi on the news when something bad happens.  Like Hurricane Katrina. I mean, how often doyou hear anything on the national news about Rhode Island?  Or South Dakota?

I remember back a decade or more ago when Idaho was in the news a lot for militia-nut groups who were active there.  When BSE (mad-cow disease) first hit the news, I read about some Idahoans who came up with a t-shirt that said, "At least our cows are sane."  I actually thought that one was pretty cute.  But the "Mississippi...Believe It!" ads don't really resonate with me.

I'm familiar enough with Mississippi - I still usually visit at least twice a year there - that I'm not really in need of an image campaign to have my opinions about the state.  I even like sentimental songs about the place, like Kate Campbell's "Mississippi and Me":

Mr. Thomas Lee ran the bank
And made a fortune on catfish farms
Every time you'd try for a loan
You had to twist his arm

Way down in me a river runs deep
Reminding me just who I am
Good or bad, it'll always be
Mississippi and me