"I wouldn't join the International Criminal Court. It's a body based in The Hague where unaccountable judges and prosecutors can pull our troops or diplomats up for trial.

"And I wouldn't join it. And I understand that in certain capitals around the world that that wasn't a popular move. But it's the right move not to join a foreign court that could - where our people could be prosecuted." - George W. Bush 09/30/04 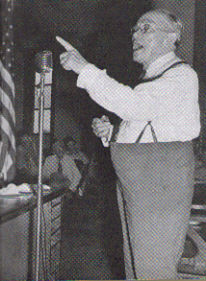 Yahoo! News has a feature called "Talk to Power" hosted by Judy Woodruff. The idea is to post questions for the guest and he/she responds on a certain date.

This week the featured guest is Thad Cochran, long-time Republican Senator from Mississippi. He is generally regarded as somehow more civilized that Trent Lott, though it's not a distinction he deserves.

I posted this question for him (a spelling error corrected here), which appears as of this writing as Comment 474:

Senator Cochran, in 2005 you were one of nine Republican Senators to vote against the McCain anti-torture amendments. We know some of the gruesome torture techniques being applied to accused terrorists and "enemy combatants", such as mock exection by partial drowning, torturing children in front of their parents, forcing victims to stand in painful positions for long periods of time while smeared with their own feces, and many other sadistic acts. We know that a number of prisoners have died under torture. Why do you support such vicious actions? Doesn't this make you exactly like the worst of the Southern bigots of the 1950s who supported torture and murder in the context of racial lynchings?

As I've written here before, McCain's anti-torture posturing even on this was transparently phony, since these acts were already illegal and Bush claims the power to ignore any law he chooses based on Cheney's Unilateral Executive theory of Presidential power. After Bush signed the bill with a "signing statement" indicating he would ignore the new law just like the old ones, McCain said he was fine with that.

But that doesn't excuse the nine Republican Senators listed above. It just emphasizes how committed they are to having the US government practice these vicious acts.

"Men without conscience are capable of any cruelty the human mind can imagine." - Dick Cheney 01/26/05